I have been neglecting the old blog, there’s all sorts of cobwebs and paintbrushes laying about in here.

Sampson the purple dog is doing well. He is 13 now.  He had to have surgery on his leg to remove a tumor but it was benign, thank goodness. It was a ruff operation but it didn’t take him long to get back into his yoga routine. 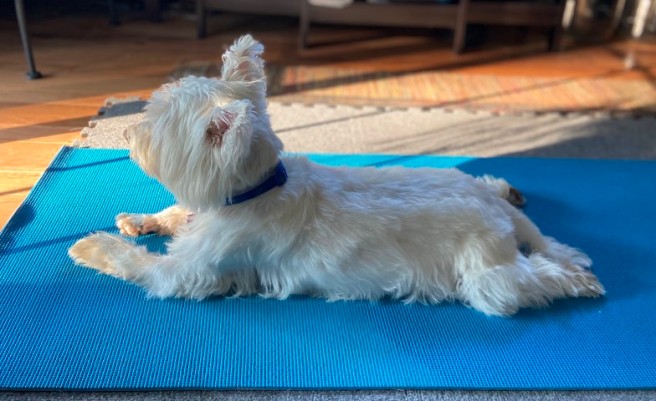 He’s been pretty lonely since Zeus passed away. He grew up with three cats and Zeus of course was his nonstop companion. He was having fits every time we left him alone and let me tell you terrier fits are very very loud so in March we got him another friend.

This is Tallie, she’s a little girl lab. She loves Sampson so much even though she finds his chipmunk obsession bewildering. He seems to find her entertaining too.

She’s growing quickly and is already bigger than Sampson. She won’t get as big as Zeus was but she’s big enough now that she can reach the countertops and that has been loads of fun. 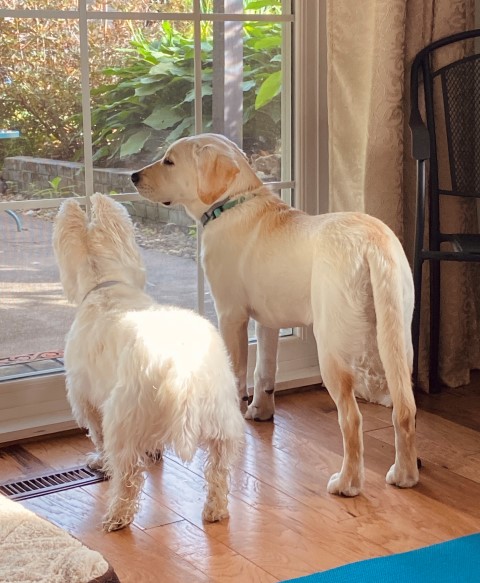 Arts and crafts wise I was so sure, I’d have all sorts of time with the quarantine to do stuff but nope, Life was like “Hey! You! Busy! Busy!”.

I did make a few animals. This is from a pattern on “All About Ami“. She has such great patterns. Check her site out.

This turtle is a combo of a few different patterns.  I really wish I had written down what I did but I think it’ll be easy enough to redo. The hat I made up with scraps. 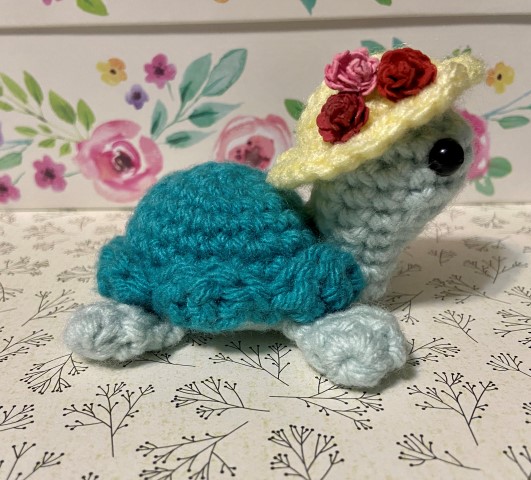 I’ll be back soon with some experiments and such that I’ve been doing. Until then pass this lemon Bundt cake around and I will talk to you soon. 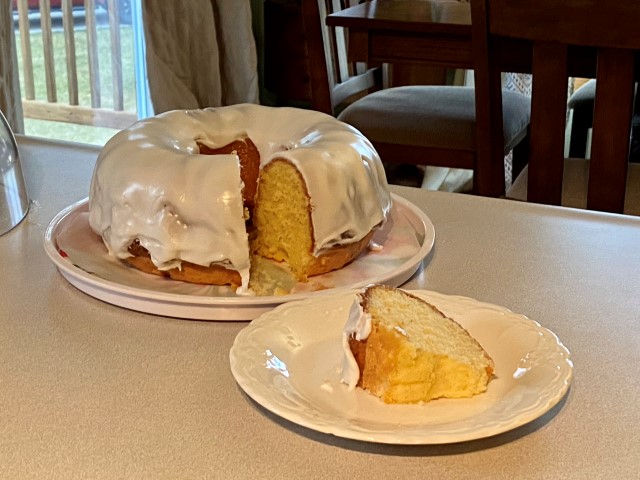 Recipe from King Arthur Flour’s website. Check out their advice on making Bundt cakes, if you’ve never made one before. I doubled the icing recipe because why the heck not.

Sing a song of sixpence

With a bottle full of rye

Baked in a pie

While the repairman is here

I had a leak, oh dear

And the carpet needs to be thrown out!

My sister is in her car

The turkey needs some stuffing

But I’ve blown up my toaster.

The dogs are in the backyard

Playing in the muck.

And Dummy is very worried

Because he thinks the bird is stuck.

And that’s a reason to cheer.

So to all my friends near and far,

Have a Happy one this year!!

Dummy get out that pie!  He’s not stuck!! 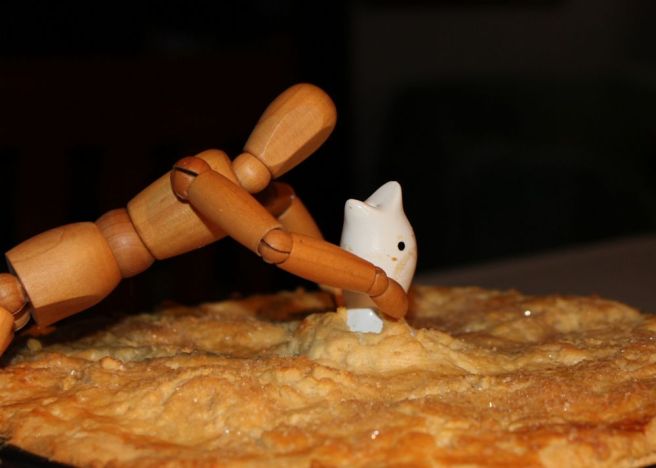 This is an acrylic of my backyard.

It’s lovely and has a large expanse of beautifully kept grass (seriously there’s no creeping charlie or crabgrass!!) that flows to a rather steep forested ravine where deer, rabbits, foxes, snakes, possums, raccoons, owls, turkeys and all sorts of other furred and feathered creatures frolic.

Unfortunately I also have a klutzy dog who likes to frolic too.

So there was Sampson frolicking and rollicking when he hit the steep part of the ravine.

And away he went.

I saw it in slow motion, he tumbled and rolled and tumbled some more….It was like watching a little furry snowball, flashing white against a backdrop of autumnal browns and purples and even though I appreciated the juxtaposition of colors, my heart stopped.

Anyway.  I ran down, he ran past me going up. I ran back up.

Then I realized he couldn’t use his leg. And he was very sad. We had to go the vet.

My vet is in the town of Milan. If you read that and pronounced it like you would expect, you were wrong! It’s pronounced “my-land” and if you pronounce it the way most normal people on this planet pronounce it, they snicker behind your back and think you’re a fancy pants. My vet’s office however has the name of the town down the road on it even though it’s not in that town probably because people can pronounce that name. But Milan or My-land, I secured Sampson in my car and off we went.

At which point in a town of 5000 people, I ran into a traffic jam.I called the vet from the car. Don’t worry, I always keep my hands on the wheel. I have one of those Bluetooth things (though I don’t know why it’s called Bluetooth, the last time I checked my phone it did not have teeth nor was it blue). The phone works through my stereo and the buttons on my steering wheel, I’m not quite sure how it works but I think it involves small magic leprechauns and a cat named Henry.  The first time someone called me I was listening to “Rock Lobster” loudly. It rang, and for a moment I thought the record had skipped then after a moment I remembered that it was not 1980 and deejays don’t use records anymore plus the odometer display was flashing what looked like my house phone number. Either my house was calling me or I had driven much further then I meant to. I panicked and pressed every button in my car and ended up listening to Muzak. I never did find out why my house called me. It’s never called again. I think it’s mad and wants new carpets.

But I digress. I called the vet to tell them I was stuck in a traffic jam and seeing as it is a town of 5000 people, they already knew.

But after twenty minutes I managed to drive the block and a half to the vets and park. I went to gently pick up Sampson even though my hands were blocks of ice. He then jumped out of the car and ran up the stairs to the vets. On all four legs!

To make a long story short (if you can believe that at this point, you’re, I’m sure a very nice person but gullible. You should work on that) Sampson did injure himself but not badly. He apparently has a floating patella. The vet showed me how to put it back if it slid again and gave him some anti-inflammatories (isn’t that a double negative, shouldn’t it just be flammatories). The vet said, it’s fairly common in small dogs and not a big deal. I’ve never had a small dog before Sampson. I did go home and ask Zeus how his patellas were and he said fine. And I asked how his parents’ and siblings’ patellas were. He wasn’t sure so he texted them and they texted back saying their patellas were just fine as well. There you go, it must be true.

And to my family who may have mistakenly assumed I’ve been in the kitchen baking all this time…you silly silly fools.. yes the brandy and eggnog is nearly gone but there will be pie and buttertarts.

Just be careful how you bite into them.

The pink rabbit is missing.