No, not the music kind. I do love that though.

I received a new Ipad and Apple pencil. I’m quite enjoying them. I downloaded both Procreate and ArtRage. I haven’t tried ArtRage much yet but I’ve been having fun with Procreate.

Procreate has a symmetry option which I’ve been having fun with.

To create something similar.

This is what I did.

Layer 1: random color splotches then used a Gaussian blur to smooth the edges. I saw one lady online used the smudge tool to make it looks like those ones we used to do in school with colored pencil under crayon, I liked the smoother vellum sort of look. You could really do anything or even one bright color.

Layer 2: filled with a dark then set the drawing guide to whatever symmetry option and then used the erase tool to draw.

I like the monoline brush for these it gives a nice smooth edge.

Any questions? Comment below and I will get back to you ASAP.

I was involved in a Christmas card trade on WetCanvas with a few other artists. It was so much fun and I received some beautiful cards from all the world.

These were the ones I made. They’re ink and metallic watercolor. The metallic are so much fun to work with but they are hard to photograph! 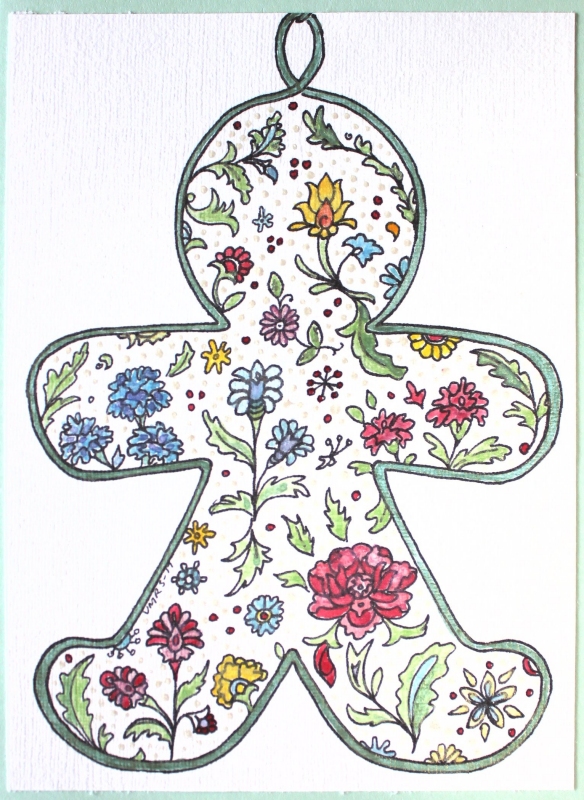 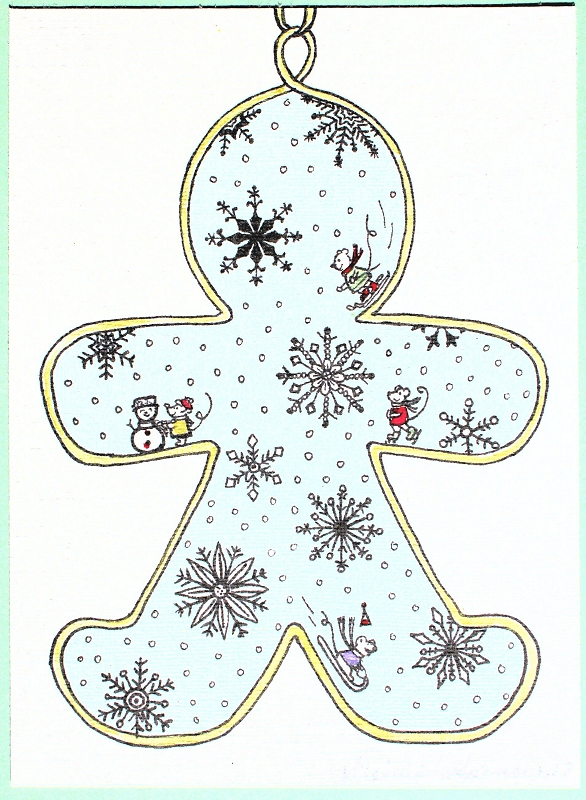 I also did a Science Fiction ~ Fantasy Christmas trade. I made this dragon for a wonderful friend of mine,  who is a guide on the Science Fiction & Fantasy forum on WetCanvas. She does monthly challenges there that are so much fun and very clever. If you like scifi or fantasy, check it out!

This is watercolor, ink and a whole lot of glitter.

I hope you have a happy holiday whichever one you celebrate!

Much love and good wishes to all!

It’s been so hot, people are losing their minds. This store in our town even forgot how to rhyme.

I saw on the news people were in all the public fountains trying to keep cool so it didn’t really surprise me when I realized I had someone in my own fountain. I would have told him to get out but the truth is if my fountain had been any bigger I would have been in there too. 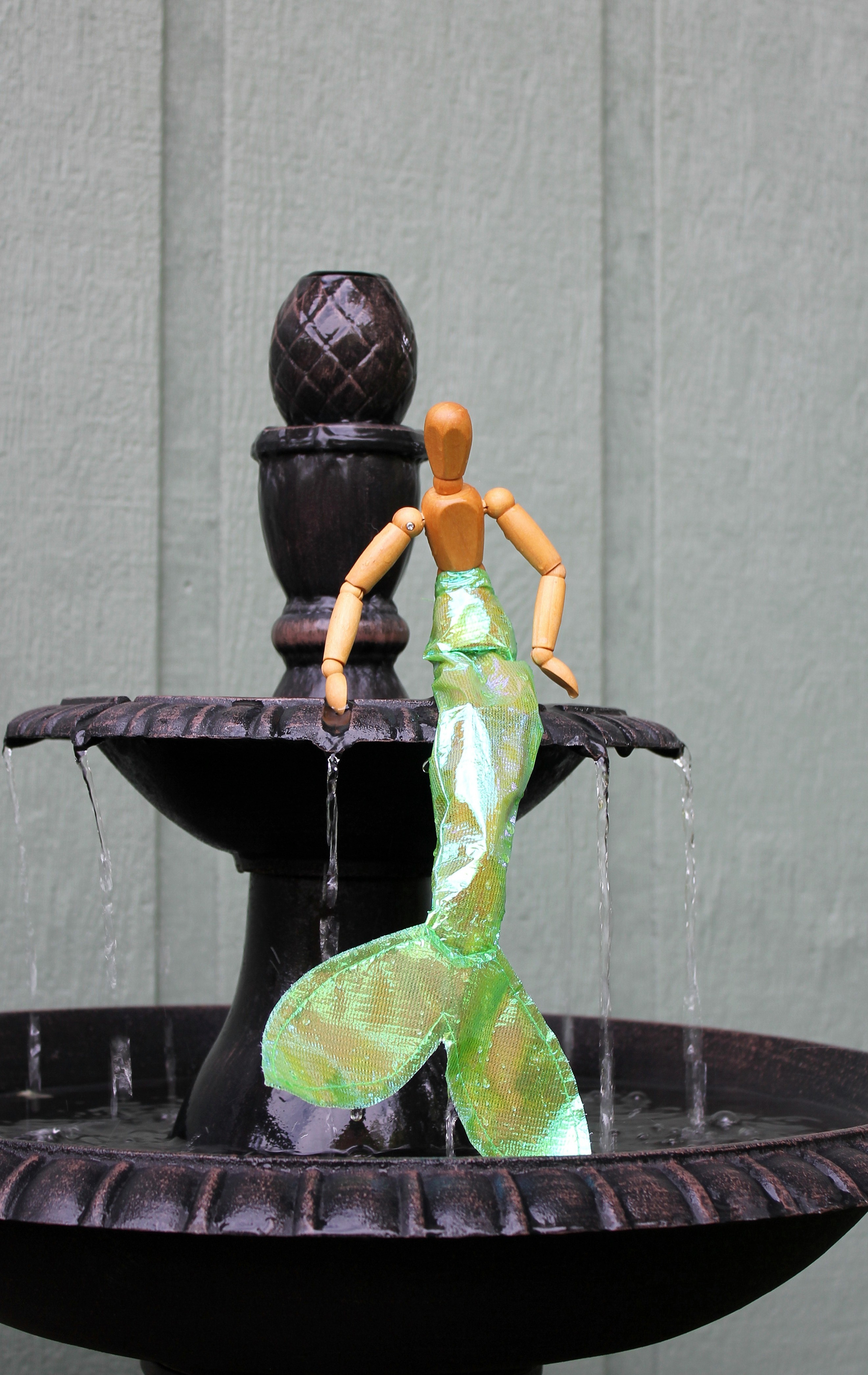 So it’s been a lazy summer so far, mostly because if anyone moves, they melt on the spot.

We had a new deck built. It’s great and it’s so much easier to relax on a nice big deck without bugs bothering you…

I tell you the bugs this year are downright obnoxious. They seem to know the birds and mammals are just too hot and tired to chase them so they’re getting very bold.

This one here even decided to become a Peeping Tom.

Or he could have just been a member of the paparazzi trying to get photos of Dummy in his mermaid get up.

Check out that supercilious grin though, he wasn’t a bit sorry even when I caught him at my windows.

I went inside thinking he had listened to my lecture but those paparazzi are merciless.

He was slyly leering right into my house.

The least he could have done is waited until I washed the windows so I wouldn’t have to show everyone my spots…It’s a bit embarrassing.

Creepy. But they did inspire me to draw a dragon and a gargoyle.

I drew these with pen and ink for a trade on Wetcanvas. They are ATC / ACEO size, that is 2.5 by 3.5 inches (the size of a playing card).

This first one was from a fountain in Germany. I realized while I was drawing it that since it was sculpted in the 16th or 17th century, most likely there were still many people at that time who thought dragons were real. Did you know that in medieval times, they thought that the only thing elephants were afraid of were dragons. (They also thought hyenas changed their gender at will but that’s beside the point) So I suspect the owner of this fountain who were members of the real Frankenstein family (and isn’t that just cool) put this dragon on it to keep out the hordes of high diving elephants that were so prevalent at the time.

It’s also my theory that all the Bigfoot hunters of today are the descendants of Dragon hunters. Yes, every generation in history has had it’s legions of believers running through the woods, getting freaked out by owl calls and coyote yaps and making facts up about creatures they’ve never actually seen. (Not to mention leaving scores of Bigfoots and Dragons giggling themselves silly)

Now this next one, also the size of a playing card is a Gargoyle on top of the Historic Wells Fargo Building in Davenport, Iowa.

It was supposed to keep bad vibes out of people’s money but well we all know how that turned out… I blame it all on acid rain myself.

This building is from the Roaring 20’s and has a lovely clock tower but also a very strange temple on top of it. It would make a good setting for a creepy story. 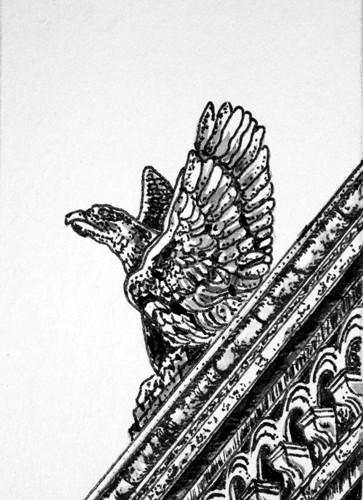 And this is a rainbow cloud, it has absolutely nothing to do with anything else but it’s pretty

Have a good one!

Acrylic painting of a field around the corner.