I recently did an ATC trade on WetCanvas.com. The theme was “Painting from the Masters”. We weren’t  picky on what master/artist it was as long as the work we were copying were made before 1923.

An ATC is an artist trading card. They are 3.5 x 2.5 inches, the size of a traditional playing card.

This card is based on Berthe Morisot’s “Woman at her Toilette”. Morisot was an impressionist. She studied with landscape painter Jean-Baptiste Camille Corotin and in Paris under the tutelage of Joseph Guichard who had her copy Masters at the Louvre. I’m sure she would enjoy knowing that people are copying her! My version is in acrylic on 300 gsm watercolor paper.

This card is also in acrylic on watercolor paper. The original by Canadian, Helen Galloway McNicoll, was called “Buttercups”. McNicoll studied under William Brymer in Montreal. She also painted in Britain as a member of the Royal British Society of Artists and was vice-president of the Society of Women Artists. She was one of the few impressionist who was able to make a financially secure living from her art. She was deaf since childhood and died young from diabetes at the age of 35.

This card is based on a wooden panel painted by John La Farge simply titled “Fish”.. He was a member of the Arts and Crafts Movement and was noted for his stained glass windows. He designed windows for the Trinity Church in Boston and Memorial Hall at Harvard.

To make this card look like wood I first did a ocher undercoat. When that was dry I painted over it with a thicker coat of an ocher/red mix. When that was almost dried, I gently scratched out wood grain like patterns with the edge of a palette knife and let it dry before adding the fish and decorations. 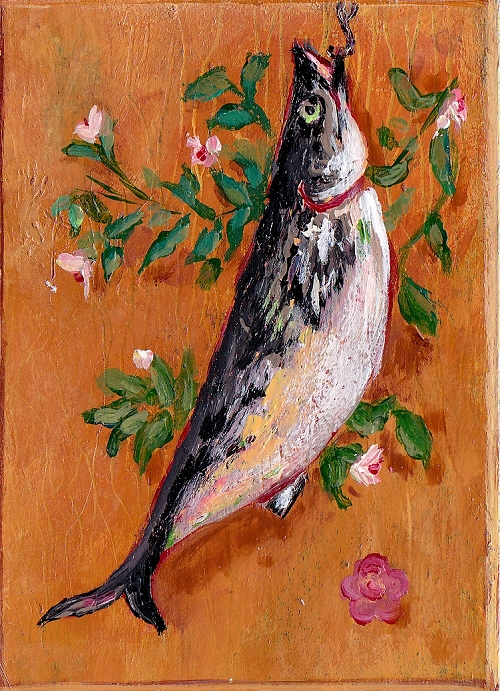 It was interesting copying the works of others but I have a tendency to change them to how I would like them to look, very cheeky I know but I can’t seem to help myself!