To my dearest and beloved Mother Nature…

Listen lady, I get that screwing around with us is fun for you.

Making sure it’s cloudy every time I have even the slightest chance of seeing an astronomical event..

Seriously I had my camera and my most powerful lenses all set up to see the asteroid 2005 YU55, had my game plan set and then.. Clouds!?!!

Always with the clouds. Jeez.

Anyway I get it, you’re mad. I’ve seen photos of the Pacific Ocean Dump . It’s disgusting.

And I get it, politicians are talking about building a huge electric fence along the Mexican border which will disrupt the migration patterns of several animals including the jaguar. Now I’m sure the politicians, since we all know how clever they are, will come up with a plan to allow jaguars to cross at mandated checking points provided they show proper ID and have visas. But although cheetahs read quite well and are often spotted curled up with a nice cup of tea and a mystery novel, jaguars don’t read. Filling out all those forms to get a visa would be out of the question. And even if they were given the visas and had ID, they wouldn’t be able to carry them.  They don’t have pockets, though I suppose a lanyard wouldn’t be out of the question.

Yup, you do have a point, Mother Nature.

But to make it sleet, than freeze, then snow!

Thank goodness Dummy can fit in my tea cozy or he would have frozen to death while trying to clear the ice off the banisters.

He’s being very helpful since I actually managed to let him do his real job and pose for a painting. 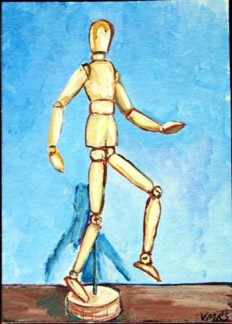 I also tried some gouache. Weird stuff, you can use it like acrylic or watercolor.

For the pumpkin I used a photo reference from the Reference Image Library on Wetcanvas. Thank you to the contributor.  Normally I take my own photo references but the Wetcanvas RIL, is a useful tool for playing around. Most of the photos I take, I take with plans to use for references. In fact I have spent numerous hours trying to get a photo of the deer in my backyard. But the other day I was only trying to take a photo of this tree for a painting reference.  When I looked at the camera monitor I realized I had been looking at the tree for so long, I had completely missed the two deer who were rudely staring at me. 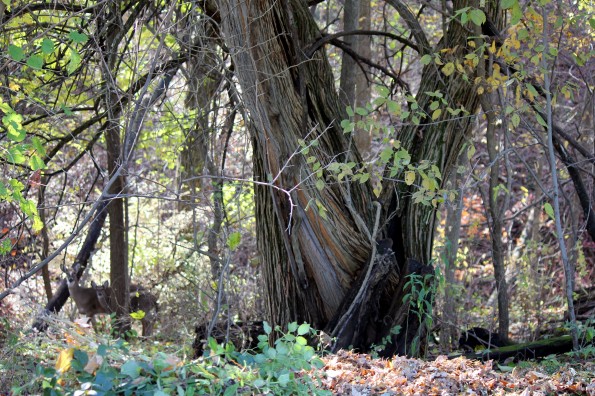 Apparently being contrary creatures, deer don’t like to have their photos taken unless they think you’re not taking a photo of them. Vain, I tell you.

Oh hey, the sun is shining!

That’s good, I can get my tea cozy back from Dummy.

Thanks Mother Nature. Carry on..

There was a very autumnal sunrise this morning.