Recently I watched a very serious documentary. In this documentary, two charming young fellows, let’s call them Crackalackin’ and Sippin’Shine, fell prey to a mysterious and elusive creature deep in the Appalachian forests of West Virginia. One day while wandering through the woods, misfortune befell them when they came upon this dastardly, devilish, despicable, degenerate of a demon.

Even though they were terrified, petrified, paralyzed and stupefied, they were able to give a clear and concise description.

The creature was gigantic! Nine feet tall at least! It was a slovenly creature with disheveled wooly white fur. It had a damp rank smell.
It had flaming red eyes that gleamed with malicious intent, much like my Siamese, Minou’s would glitter if I did not obey her every command, may she rest in peace. (or at least rest under the large rock and brick memorial I built for her, I told my neighbors that it was to keep the coyotes from disturbing her grave but I really did it because I still think she was part vampire and I didn’t want her digging herself out)

See what I mean..

Man I loved that cat.

Anyway.
It had ram’s horns, not the musical instrument or the plant, but horns similar to those one might see on a ruminant animal.
It’s muscular arms were outstretched as if it was channeling Frankenstein’s creation. At the end of it’s arms, raccoon like paws with eagles talons reached for them.
And it had a possum bottom. With a prehensile tail.

It was the platypus of monsters.

That’s right it was the…the…

(a distant clap of thunder is heard)

Or a large albino platypus. Take your pick.

they innocently mistook it for a tree.

Which begs the question. What the hell kind of trees do they have in Appalachia?

Are they like this tree? I call this photo “The Mad Tree” because that tree is mad. I didn’t’ stop and ask why. It didn’t seem like the type of tree to appreciate any kind of neighborly concern. 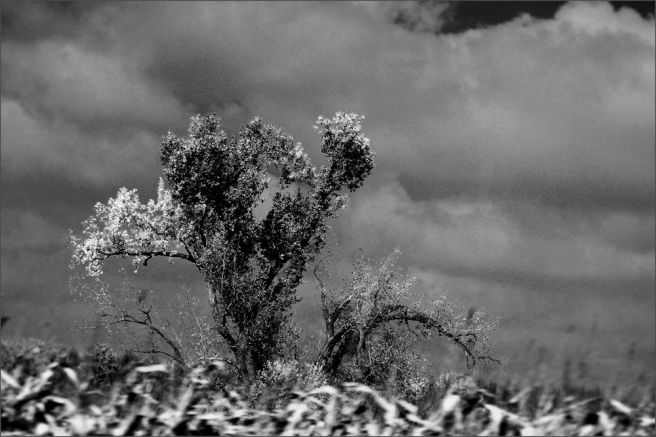 Not to cast aspersions on the tales of Crackalackin’ and Sippin’Shine but I live with a Sammy Squatch.

A Sammy Squatch is a rare but not so elusive creature.

While the Sammy Squatch (Minimus Canis Squatchacus) is one of the smaller members of the Squatchie familiaris, he does share some of the distinguishing features of his larger cousin, Sheep Squatch, (Grandis Gluteus Bestia).  He too has wooly disheveled fur and sometimes smells rather cadaverous. He, however, does not have raccoon paws with eagles talons but instead has mole feet. He does not have a prehensile tail but indeed has a tail that Sammy Squatch grooming books describes as carrot like, yes he has a gluteus vegetablis (that being the scientific term for carrot butt).

The Sammy Squatch prefers to hang out in brand new recliners that nobody else has actually sat in yet, not that I’m bitter or anything, while drinking his beer.

I mean it’s not like they saw a Triffid. I could understand mistaking a Triffid for a tree.

It can be noted that they ran as soon as they saw it so how they saw it’s Frankensteinian arms with it’s raccoon hands and eagles talons while also noticing it’s possum butt is beyond me. It must have been standing in a very awkward position (or maybe they interrupted it’s yoga session). At this point I lost all faith in this “documentary”. I’m starting to believe it may not have been an actual documentary.

I was about to turn it off when they went onto a tale about aliens and a shootout in Appalachia. Now who can resist that.

So these people are in a cabin playing cards (poker) and of course they weren’t drinking at all (really) when one of them noticed a creature in the woods. He described this creature as hunched over with front arms as long as it’s back legs and the arms were touching the ground. In other words it had four legs. It had big brown eyes, velvety skin and soft pointy ears. So of course they shot and shot and shot (p’ting! p’ting! p’ting!) breaking all the windows and yet it never once returned fire.

Because it was a deer.

And as everyone knows, deer don’t use shotguns, they prefer slingshots.

But that is heck of a story to come up with up with just to avoid paying for all the windows they broke while doing lord knows what. I’m only telling you this just in case you break a window and need an excuse for doing so. You’re welcome.

Meanwhile in my own backyard, a rampant invasion has taken place. All over the lawn there are dozens of little crop circles, swirly ones with holes in the middle. They look exactly like the marks a skunk would make when searching for slugs. They also look exactly like the landing marks a miniature fleet of little tiny UFO’s would make. So either I have skunks or I can go with the more likely explanation which is that little tiny aliens are invading the planet nightly. 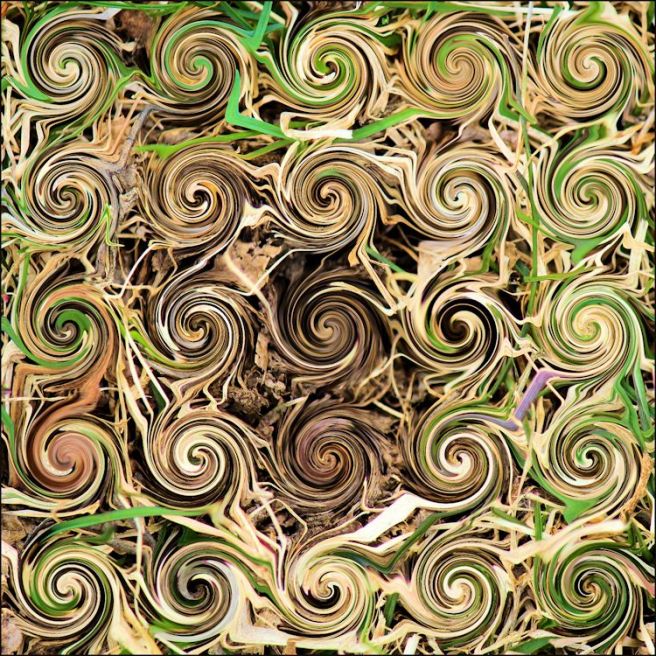 Okay that last photo may be a wee bit tampered with.

My apologies, I’ll go stand in a corner. 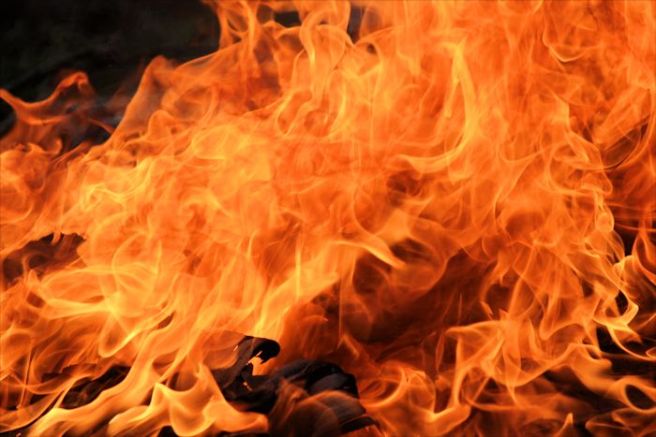 Have a good one. And watch out for mad trees.